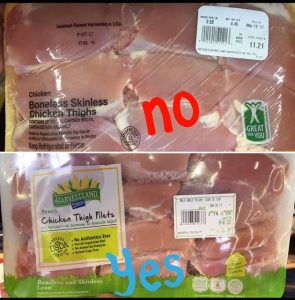 Choosing Chicken can be tricky. Especially, with all of the labeling out there. “Free Range, Farm Raised, Organic, Natural, No Hormones added.”  How do you know you are choosing the right chicken?  Choosing Chicken that is labeled USDA  Organic is always the safest option because that means they are not allowed to feed their chickens with GMO corn and soy.  Poultry feed is 90% corn and soy.  So, if you are not choosing ORGANIC, you can bet you are eating GMO chickens. Some chickens are raised in the United States but then sent to China for processing. I don’t know about you, but if I’m going to eat meat, I want it to be as fresh as possible and I sure do not want it traveling to China.  Below are some explanations of the tricky labeling.

There’s no precise federal government definition of “free range,” so the U.S. Department of Agriculture (USDA) approves these label claims on a case-by-case basis. USDA generally permits the term to be used if chickens have access to the outdoors for at least some part of the day, whether the chickens choose to go outside or not. In practice, most chickens stay close to water and feed, which is usually located within the chicken house. Chicken labeled as “organic” must also be “free-range,” but not all “free-range” chicken is also “organic.” Less than 1% of chickens nationwide are raised as “free range,” according to the National Chicken Council (NCC).

All chickens are raised on farms. So any chicken could be labeled “farm-raised.” When this term is used on restaurant menus and the like, it usually refers to chickens raised on a local farm.

Under USDA regulations, a “natural” product has no artificial ingredients, coloring ingredients, or chemical preservatives, and is minimally processed, just enough to get it ready to be cooked. Most ready-to-cook chicken can be labeled “natural,” if processors choose to do so.

The USDA has a very specific rule to define “organic” production and prohibits the use of the term “organic” on packaging of any food product not produced in accordance with its rule. According to USDA, the organic label does not indicate that the product has safety, quality or nutritional attributes that are any higher than conventionally raised product. Finding ways to raise chickens without any antibiotics is the latest example of an industry committed to innovation, producing a wide range of chicken products for a wide range of consumers.

The administration of antibiotics is only one FDA-approved tool to keep chickens healthy. It is not a silver bullet. Companies use a variety of management tools to keep birds healthy including: more individualized nutrition plans; the use of probiotics and vaccines; barns with better air circulation and temperature controls; and additional training programs and education efforts for farmers and service technicians.

But just like people, chickens sometimes get sick, and treating illness is a responsible part of animal care. When this happens, farmers work with animal health experts and veterinarians to determine if an antibiotic is needed.

Even if a chicken is given antibiotics in the course of its life to treat or prevent disease, the bird must go through a withdrawal time before leaving the farm. In addition, FDA and USDA have extensive monitoring and testing programs to make sure that food at the grocery store does not contain harmful antibiotic residues.

Some fresh (raw and uncooked) chicken products are enhanced with chicken broth or a similar solution. The presence and percentage of the broth or other solution must be stated clearly and the actual ingredients listed on the label. Both enhanced and non-enhanced products are currently available in the marketplace.

Sodium is used in the broth or solution of some enhanced products, usually at very low levels. The presence of salt or sodium is noted on the label.

A “retained water” statement, such as “May contain up to 6% retained water” or “Less than 4% retained water,” is often found on packages of fresh poultry. USDA prohibits retention of moisture in meat and poultry except for the amount that results from essential safety procedures, such as chilling processed chickens in ice-cold water to reduce their temperature and retard the growth of spoilage bacteria and other microorganisms. If any moisture is retained by the product after this procedure, it must be stated on the label.

Poultry feed is made primarily from corn and soybean meal. Poultry feed sometimes includes some processed protein and fats and oils from meat and poultry by-products. The composition of all animal feed ingredients used in the United States is regulated by the Association of American Feed Control Officials (AAFCO). If the chicken company chooses not to use these ingredients, the feed would contain no ingredients derived from animals and could be described as “all vegetable.”

Chickens: Made in the USA